I have a rose bush that I found years ago in the mess that was the flower bed at my old house. Isn't it beautiful??? 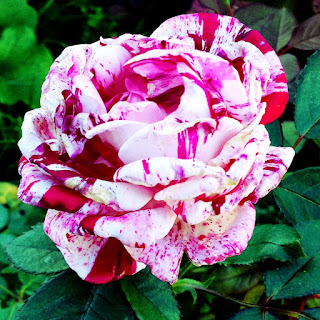 When I first found the rose, I was pretty sure it was dead. Just this hunk of root that was over an inch thick that I thought was a tree branch, but there was some thorny stuff coming out of it. So I gave it a chance, and I'm so glad I did. It moved with me, and has been sitting in the "nursery" next to the woods where we put plants that we don't know where to put yet. I'm sure it'll stay there for another year or two, and in the meantime I'm trying to take some cuttings and root them. Wish me luck that this baby grows! 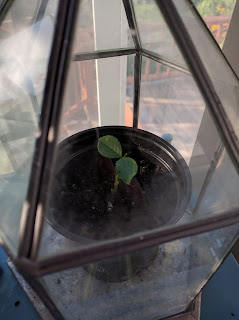 Posted by Jessie at 8:35 PM No comments:

Email ThisBlogThis!Share to TwitterShare to FacebookShare to Pinterest
Labels: gardening

This post is photo heavy - forgive me. Or not. I'm ok either way.

I have pet bunnies! Did you know that? Sugar Cookie and Henry. They're both dwarf Holland Lops, Sugar Cookie is grayer and Henry is browner. They're freakin adorable. :) They're also messy as heck, and bunnies do tend to poop while they eat. To encourage them to poop in their litter box, I keep their food dish in their litter box. And Henry likes to dump their food dish. Daily. It drives me nuts. So today I decided to make a feeding station ATTACHED TO THE WALL. That bowl isn't going ANYWHERE. 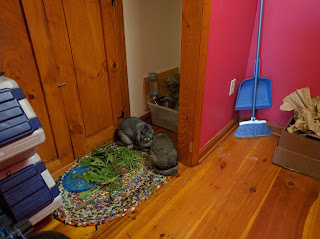 I forgot to take during photos, so here are some elaborate after photos. Cuz I'm a bad blogger for not completely documenting this. There are three stations - water bottle, food bowl, and hay manger. My goal was to build it using things I already had (minus the new food bowl). 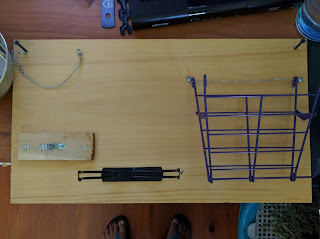 The water bottle has two parts, the top is a piece of wire attached to an eye and secured to a hook with a loop in the wire. 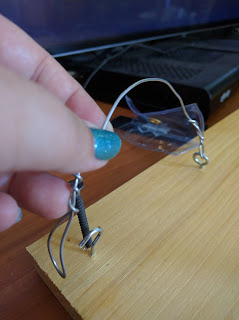 The lower part supports the weight of the bottle, so I wanted something a little sturdier. I took a curtain rod support and reshaped it with a hammer, It fell a little short so I put a thin board under it rather than try to find something else to support it with. 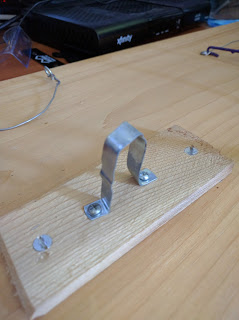 Next we have the food dish. That was easy to attach, the bowl base has two bolts coming off the back that go between cage bars, then secures to the cage with a metal strap and some nuts. The bolts, handily enough, were just 1/4" longer than my board was thick. So I drilled a couple of holes, put the bolts through, and secured it with the nuts. 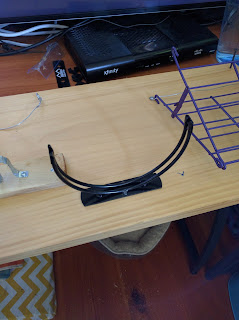 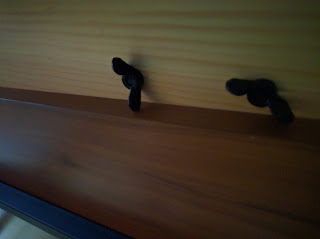 Lastly, the hay manger. It's meant to hang from cage bars also, so I gave it some wire to hang from. I made a little loop in each end of the wire and screwed it to the board through the loop with some large headed screws. 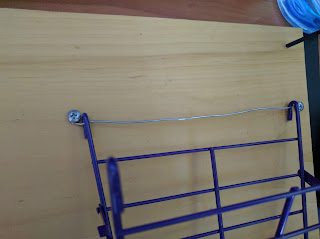 Lastly, I screwed it to the wall at the right height over the litter box, added the food dish and water bottle, and filled it all up! Henry is modeling it, below. Isn't he just too freakin cute? 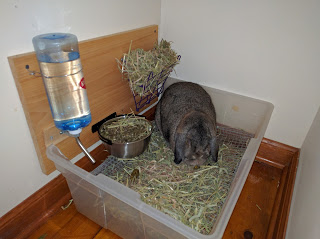 Posted by Jessie at 8:01 PM No comments:

Stretching Stir Fry with the Garden

When you have SO MUCH CHARD and your friend gifted you with the motherload of zucchini what are you going to do? Make stir fry! Obv. 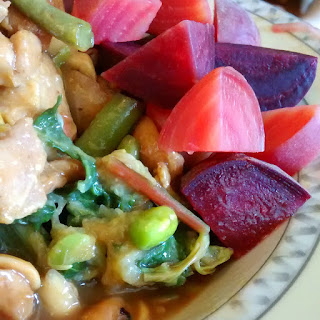 Well, we do it the easy way. We pick up the stir fry DIY bags from the freezer section when they're on sale (or we pick up a sauce packet) and then we add SO. MANY. VEGGIES. Rather than serve it over rice, we chop and steam chard, spiralize zucchini, and toss in some fresh green beans. Mix it all together and that 1-2 serving bag easily feeds 4+.

Our beets are finally ready to pick! Well, some of the bigger ones, at least. I think of it as thinning to let the littler ones get more sunlight (I purposefully crowd them). I wasn't sure about adding beets to a stir fry, but they make an amazing side dish!
Posted by Jessie at 5:53 PM No comments:

I really wish I could come up with some catchy way to say BBQ Chicken with more S's. Slathered S'poultry? Nope. 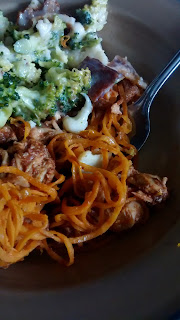 On to the recipe! Or, rather, helpful instructions!

I've been craving some sweet potatoes lately, and I also recently found the spiralizer kitchen gadget that I bought months ago! When you spiralize a sweet potato, what do you get? Snoodles, apparently! (per my friend that's what they're called, so if that's not the case, I blame her)

If you're unfamiliar with a spiralizer, it essentially is this gadget that cuts vegetables into long strands of noodles. It's pretty sweet. Google that, stat.

My darling decided he was going to make broccoli & cauliflower salad, which is delicious, and obviously needed to be consumed with gusto and an appropriate main dish.

So. Between my craving for sweet potatoes, and the nummy slaw salad, and there being some leftover plain, cooked chicken in the fridge, adding BBQ chicken to the meal was a no-brainer.

Step 1: Make Slaw Salad. Chop broccoli, cauliflower, and crispy bacon pieces, and toss it all together with your preferred coleslaw dressing (and maybe add a little honey for some extra sweetness). Let it sit in the fridge for a few hours before serving.

Step 2: Spiralize your sweet potatoes, toss with some oil (or leftover bacon grease if you're awesome like me), and bake in a 400 F oven until tender.

Step 3: Chop your already cooked chicken, toss with your preferred BBQ sauce, put it in an oven-safe bowl, and pop it in the oven next to your snoodles to get all nice and toasty warm.

Serve the chicken over the snoodles, and the slaw salad on the side. Or all touching and happily coexisting in the same bowl like I did.
Posted by Jessie at 2:00 PM No comments:

Email ThisBlogThis!Share to TwitterShare to FacebookShare to Pinterest
Labels: cooking

Right - so this whole idea started because I have SO MUCH CHARD in the garden right now. Like,
I'm *almost* sick of eating it. Almost. So I decided to start preserving it now - and rather than go with the traditional freezing of the chard, I decided to dehydrate it! Super easy.

Step 3: Trim off the stems, and save those for making bean salad (use to replace the celery).

Step 4: Lay in a single layer in your dehydrator, or place right on the oven racks like I did.

Step 5: Put your oven on the lowest setting (mine goes down to 150 degrees F) and let it cook for... hours. Like, three hours, or until it's dry and crumbly.

Step 6: Put it all in a food processor and whip it, whip it good, until it's all finely ground.

Step 7: Store in an airtight container.

You can add it to green smoothies, soup, dip... and other cooking things. Sorry, not super creative with the how to use it right now. BUT I'm sure that you'll think of something!

BEWARE - allllll of that chard in the first photo dehydrated down to less than a cup of chopped, dried greens. Don't add a ridiculous amount to your smoothie, a whole salad's worth comes to just a couple of teaspoons. If you add more than that you take the risk of... well, probably a lot of time on the potty.
Posted by Jessie at 9:12 PM No comments:

These just turned out too cute, I had to share! 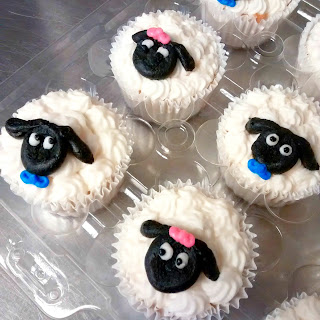 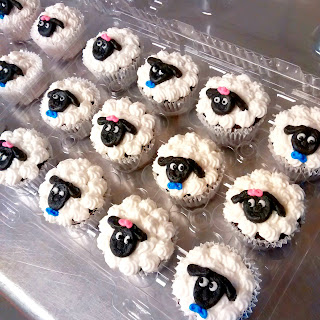 Posted by Jessie at 2:00 PM No comments:

Email ThisBlogThis!Share to TwitterShare to FacebookShare to Pinterest
Labels: bakery

Thing are growing fast! Especially the greens, we're harvesting lettuce and chard several times a
week and can barely keep up! We put in a row of raspberries, leaving room for more.

But you know what's not so cool? BUGS EATING MY STUFF. The beetles have arrived, and they're working their way through my beans. A bucket of hot, soapy water is one of my favorite ways to deal with beetles. Knock them off the leaves into the bucket and they drown. No pesticides, easy peasy.